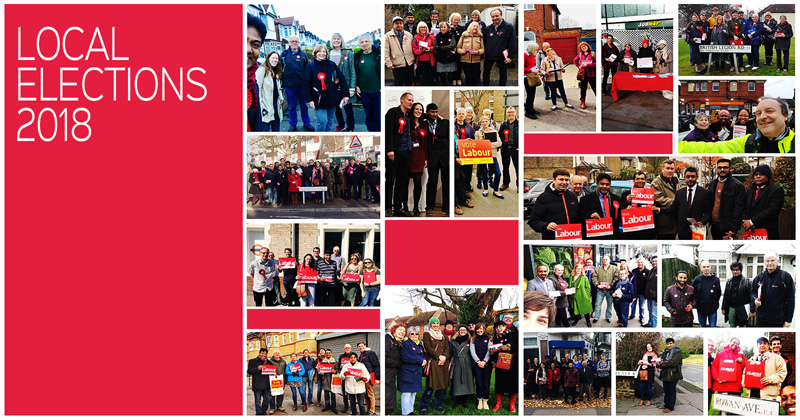 All over CWG in the lead up to the local elections we canvassed, leafletted, telephoned and worked at our campaigning till’ the sun went down (and often into the night!). We would like to thank everyone who helped us in our work.
We ran a positive campaign focussing on issues – whilst the local Tories chose to focus on nasty tactics, 6 leaflets of lies through each letter box, and slander of our candidates on social media. We refused to let it get us down and continued with our hard work which saw us return Labour councillors to some of our wards – and increased the Labour vote in our others.

HALE END & HIGHAMS PARK
In Hale End & Highams Park our one and only Labour councillor Tony Bell was re-elected, and this time joined by 2 new Labour councillors – Rosalind Dore and Zia-Ur Rehman. We could not have hoped for a better result.

VALLEY
In Valley we returned a Labour councillor – Liz Baptiste. This means we retained our seat in Valley, giving us the opportunity to continue to represent Valley residents.

In wards Hatch Lane, Chingford Green, Endlebury, Larkswood and Monkhams we worked hard and increased the Labour vote. This gain is laying the ground for our future successes. There is much work to be done all over CWG, and year upon year we plan to chip away at the Tory stronghold on our area.